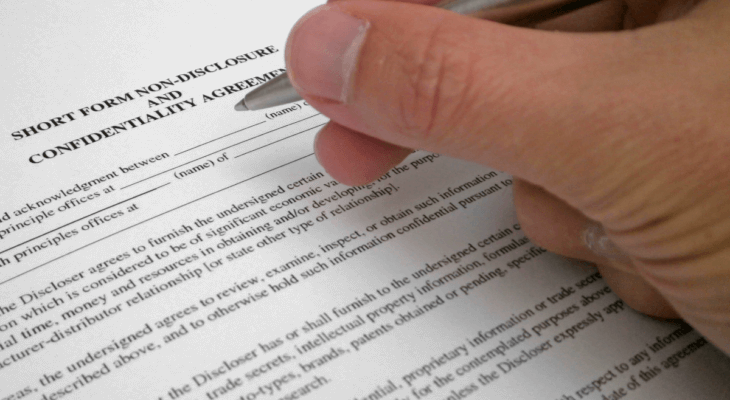 Businesses face a dilemma with non-disclosure agreements. They want to protect their processes and keep what happens in their daily business from coming to public light. They may have certain sensitive information they do not want to be disclosed or trade secrets they want to protect. However, non-disclosure agreements are becoming commonplace in business these days. As a result, courts may be hesitant about enforcing a non-disclosure agreement (NDA) because they view them as interfering with an employee’s ability to earn a living and their freedom to speak. Businesses must strike a balance when they ask employees to sign an NDA because the ultimate goal is for these agreements to be effective.

The Circumstances in Which an NDA May Be Effective

Businesses may also use NDAs in the following contexts:

NDAs Are Much More Complex Than They Seem

On the surface of things, an NDA seems like a straightforward agreement that serves a valid business purpose. However, the ramifications of an NDA make things much more complicated than they may first seem. It is a serious matter when someone’s right to speak is constrained. On the other hand, your business’ valuable information deserves to be protected.

One of the main issues that get in the way of enforcing a non-disclosure agreement is the fact that a business may overreach. To be enforceable, an NDA must be reasonable. The agreement may try to reach beyond what is reasonably necessary to protect a business.  Courts generally disfavor contracts that restrict an employee from being able to earn a living. If the language of the NDA unreasonably restrains someone from going into business or getting a job, it may not be enforceable. As such, the agreement should seek to do nothing more than is absolutely necessary to protect confidential information.

Why Courts May Not Enforce an NDA

Other reasons why non-disclosure agreements may not be enforced include but are not limited to:

How to Enforce an NDA

First, a business would need to have strong evidence that the agreement was actually breached. Courts do not like generalized accusations that are not backed up by proof. With a valid agreement and proof of a breach, the business must determine what remedy makes the most sense and will be the most valuable.

In general, NDA lawsuits would seek the following remedies:

For the court to award damages, a business would need to prove how it was harmed by the breach of the NDA. The business should show specific calculations that explain its economic damages, including the change in value to the business and/or lost earnings opportunities. A court would need to quantify the exact harm to ensure that a business is properly and fully compensated for it. The testimony of an expert witness may be necessary to establish the damages, as the court would be looking for specific examples and descriptions of damages.

It is up to the court to determine the damages that the breaching party would need to pay. The agreement itself could specify the damages, but it must contain reasonable terms. If the damages that are part of the agreement appear to be harsh or draconian, a court may not enforce them and/or may substitute its own opinion for the contractual terms.

NDAs Are Valuable, But They’re Not Always the Answer

Businesses must be aware that an NDA is not a prophylactic catch-all agreement. It may not even protect them when they need it. Nonetheless, there are important reasons for non-disclosure agreements.

The key takeaway is that a limited and tailored NDA has more of a chance of being enforceable than a broad one that overreaches. An NDA may be an important tool to protect your trade secrets and the reputation of your business. However, you should prepare yourself for the fact that it may not be enforceable. Everything depends on how a court views the language of the agreement.

Some NDAs are not worth the paper they are written on, while others are fully enforceable and work to protect a business. How a particular NDA is drafted will dictate whether it is enforceable. An experienced Houston business litigation attorney can help a company appropriately tailor the scope of an NDA to give it the best chance of being enforced.